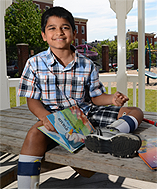 When brain injury happens at a young age, education can be a critical component of recovery.

Eight-year-old Rohan Rai’s smile can light up any room. He loves to sing and can bring an audience to its feet with his rendition of “I’ll Always Love You,” which he performed at his school’s talent show last year. Seeing him today, you’d never guess that he has a brain injury.

Three years ago, Rohan had just started kindergarten in Connecticut when a devastating car accident left him with a traumatic brain injury, halting his formal education just a few days after it had begun. When Rohan emerged from a coma and was stabilized, his parents knew he needed intense therapy, but they also wanted a rehabilitation program that incorporated education into his recovery.

After researching many rehabilitation programs, the family decided to relocate to Baltimore so their son could attend theSpecialized Transition Program at Kennedy Krieger Institute. What sold them was the Institute’s integrated approach, combining education and therapy all in one place.

At Kennedy Krieger, Rohan received daily physical, occupational, and speech therapy, as well as academic instruction from educational specialist Ali Adler. The curriculum included much of the same instruction that he would have received in kindergarten, but Adler tailored it to Rohan’s learning needs. Because of his injury, he had problems with memory, attention, language comprehension, and processing. Working with him one-on-one with minimal distraction helped with his attention, and lots of review and repetition helped with his memory and language comprehension.

The family was impressed with how well Rohan’s team of therapists collaborated with each other. “In the classroom, Ali would teach something and then his other therapists would reinforce the message in speech, occupational, and physical therapy,” says Rohan’s father, Rajesh Kumar. “It wasn’t just ‘do it here and forget about it.’”

Rohan made remarkable progress in the Specialized Transition Program. For Rohan’s mother, Anjali, the defining moment came when she heard her little boy read for the first time. “He came back with his folder one day and read four or five sentences to me,” she recalls. “It was truly, truly amazing.”

When Adler told the Kumars that Rohan was ready to return to school, they resisted the idea at first, because they thought he needed to spend more time in therapy. But he had already missed his entire kindergarten year, and Adler and his team of therapists felt that being integrated with peers and participating in school would be the best therapy for Rohan. After some convincing, his parents agreed. “Looking back, we agree it was absolutely the right decision,” says Anjali.

Going through the Individualized Education Planning process would have been daunting for Rohan’s parents without the help of Adler, who coordinated all of the information from his physical, occupational, and speech therapists, and advocated for Rohan’s needs in a school environment. “We help educators understand that even though a student returning to school after a brain injury might look really good, there may be some nuances with memory, processing speed, and sequencing that will negatively impact learning if they are not addressed,” Adler explains.

Adler helped Rohan’s parents narrow down which county would offer the best education for Rohan, and then arranged a meeting for them with the county’s director of special education. “Ali knew the right person to talk to. We wouldn’t have gotten that meeting without her,” says Anjali.

Together, they found a small kindergarten program for Rohan in a public school in Howard County, where he received occupational, physical, and speech therapy, consultation from a psychologist, and special education to meet his needs. At the same time, Adler educated Rohan’s family on the special education process so they can continue to advocate for him as he progresses.

Now in second grade at the same school, Rohan is thriving. He continues to receive follow-up care through Kennedy Krieger, and Adler will help with educational issues as long as there is a need.“The therapists at Kennedy Krieger have been truly amazing,” says Anjali. “They’re always there no matter what. We share all our joys with them—every little thing he does. They are almost part of the family now.”