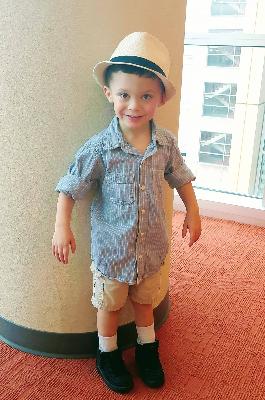 This team is in honor & celebration of Lawrence Joseph III (a.k.a.Tripp)

Tripp is a sweet, loving, silly, inquisitive 4-year-old who loves reading, ABC's, numbers, Mickey Mouse, Zuma from Paw Patrol and anything that is the color ORANGE!

Tripp made his grand entrance into this world nine weeks early when I (his momma) was sick in the hospital with some serious health issues. Rather than being born via C-Section so I could have emergency surgery, Tripp came out all on his own the night before—much to the surprise of everyone!! (Including his Daddy & Nonna who were home sleeping and missed everything!!)

Tripp was in great health for being born so early and after 35 days in the NICU, he came home! While Tripp was a little slow to meet some of his developmental milestones, like sitting up and walking, there was never much to be concerned about. It was just after Tripp's 2nd birthday in August 2019 that he started walking on his tiptoes and losing his balance. After several appointments with doctors and clinicians at Kennedy Krieger Institute, Tripp was diagnosed with a mild form of Spastic Diplegia Cerebral Palsy in Summer 2020. Basically, this means he has tight muscles that mainly affect his two lower limbs. Tripp is pretty high functioning...he walks and runs without any assistive devices, although you can tell he has an abnormal gait. He struggles with stairs and jumping but it doesn't seem to bother him at all. Tripp has been a real trooper who has been fitted for four different sets of leg braces since July 2020. He’s attended weekly outpatient PT sessions since June 2021 and received Botox injections in his legs in July 2021.

Now Tripp is getting ready to embark on his biggest journey yet! At the end of March 2022, Tripp will be having Selective Dorsal Rhizotomy (SDR) surgery. During this surgery, the surgeon will identify and cut the nerves that are causing the tight muscles in his legs (known as spasticity). In doing so, this will help Tripp walk better, have better leg function, less pain, and hopefully reduce his need for more orthopedic surgeries in the future. After surgery, Tripp will spend six to eight weeks at inpatient rehab at Kennedy Krieger learning to walk and use his leg muscles again without depending on the tightness/spasticity he has felt since birth.

We are so lucky to have a places like Kennedy Krieger Institute and Johns Hopkins Hospital right in our backyard. People travel from all over the country to receive services at these two internationally recognized children’s hospitals. I have worked at Kennedy Krieger for 19 years and always known what an amazing place it is. But now, as a parent, I am seeing first-hand what a difference it makes to my family. I can’t say enough amazing things about this place!

This journey is going to be a marathon...not a sprint. And we will all be there supporting Tripp every STEP of the way!

About ROAR for Kids

As we host our first in person event in two years, we hope you will join us on Saturday, April 30, 2022 for Kennedy Krieger Institute’s ROAR for Kids at Oregon Ridge Park in Cockeysville, MD. ROAR for Kids will once again feature a 5K run and a low-mileage fun walk, which participants may participate in virtually or in person. Additionally, back by popular demand, the event will host a family festival including princesses, carnival games, the VERY popular Mascot Challenge and more! Registration opens at 6:30AM with both races and the family festival kicking off at 8:00AM, the Mascot Challenge will take place around 9:45AM with the event ending around 11:00AM. We hope to see you there!